Luang Prabang has so many incredible things to explore. Whether you are interested in nature, shopping, cuisine or local culture, Luang Prabang easily makes you satisfied. Please do not miss these attractions in the former Royal capital. 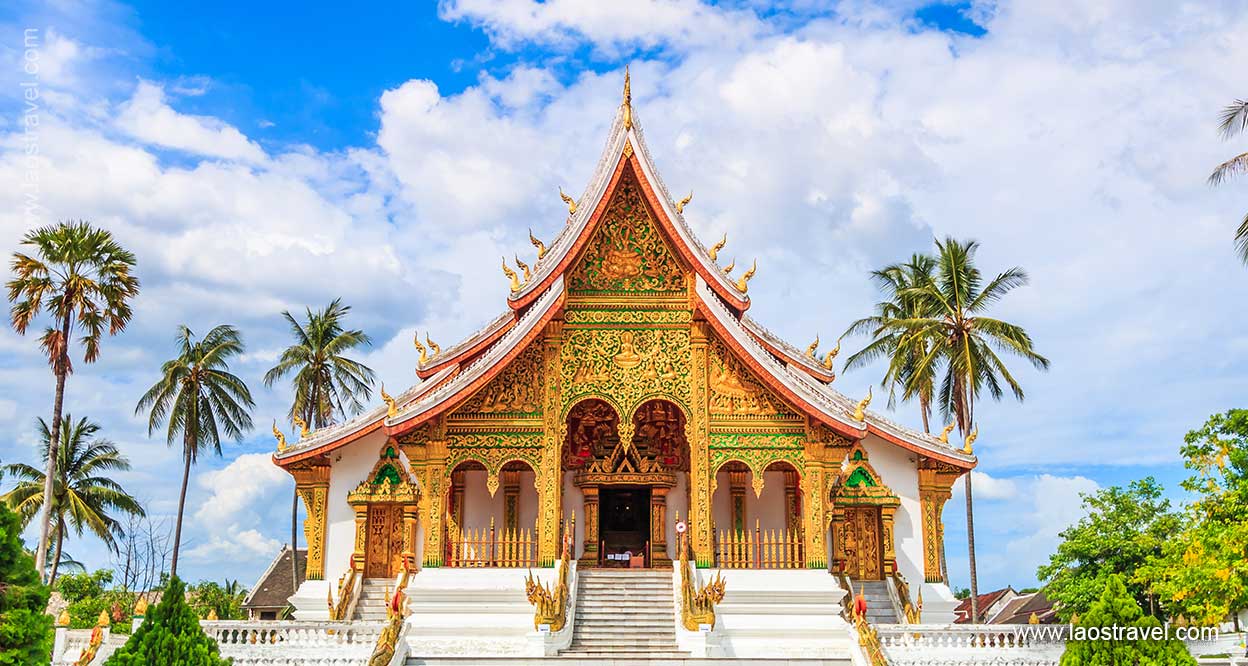 It is the former King’s palace and was converted into a museum in 1975 when the monarchy was overthrow. Nowadays, travelers can see many nice items including rare furniture, traditional costumes and arts, jewelry, ornaments as well as working tools and utensils of the early part in 20th century. Especially, do not miss Haw Pha Bang, Royal Temple built to enshrine the Phra Bang Buddha image. 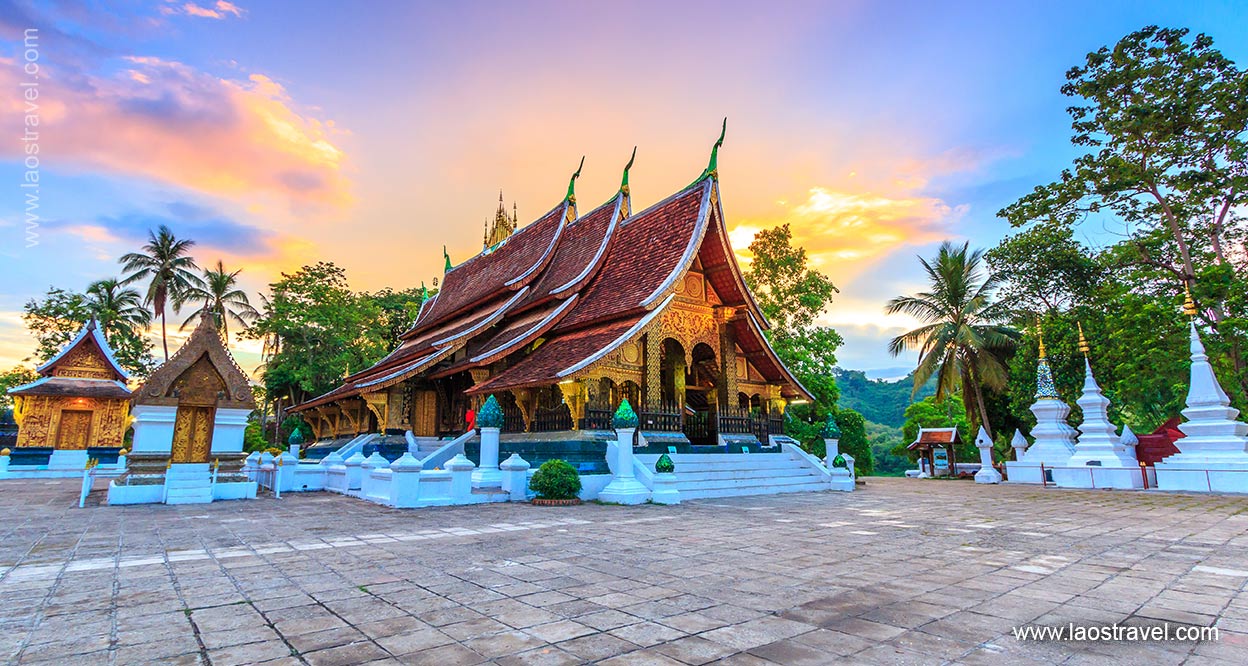 Wat Xieng Thong or the Golden City monastery is one of the most important monasteries today.

Built at the mid -16th century, it was the place where centuries of Laotian kings were crowned

The temple has been restored several times but some original buildings remain. There are over 20 buildings serving various religious functions on the property. 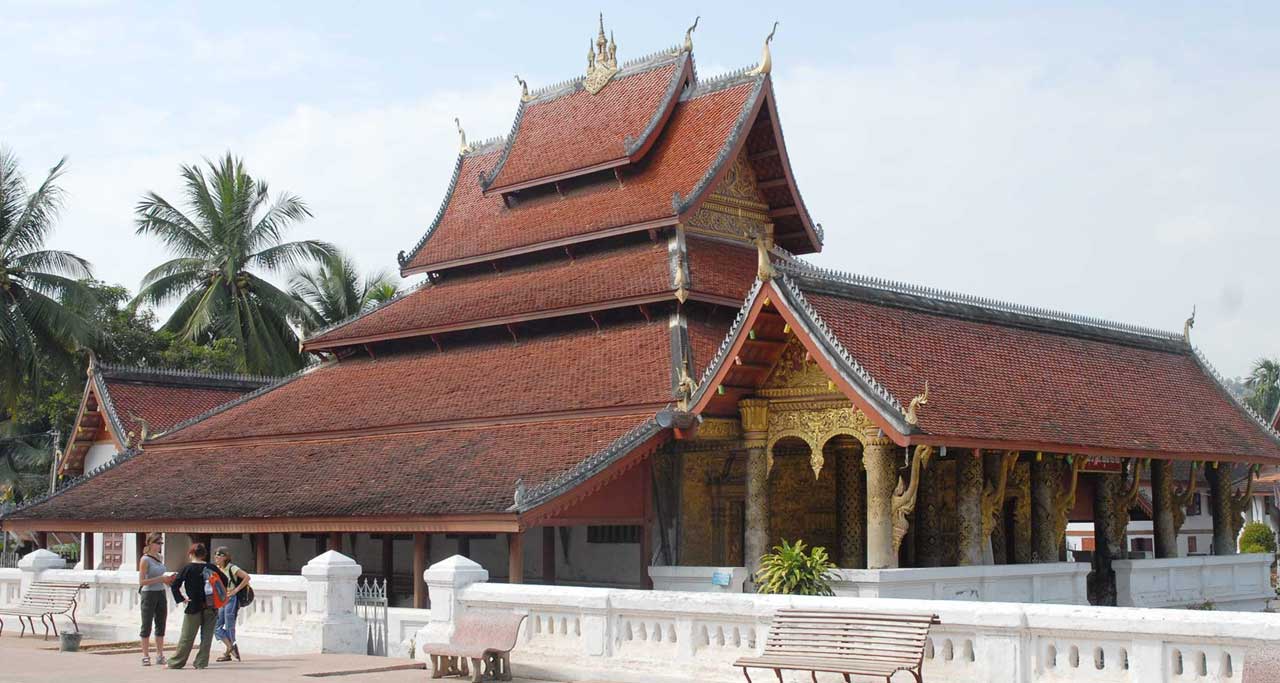 It is a popular attraction in Luang Prabang. It is situated next to Royal Palace Museum along the Sisavong Vang Road. Its highlights are four tier roof and wood carvings and the gold-leaf murals on main pillars along with the portico entrance to this temple. The intricate panels depict the last life of Buddha. During Bun Pimai festival or the Lao New Year, the Prabang sacred Buddha image is carried from Royal Palace to Wat Mai for the ritual cleansing, 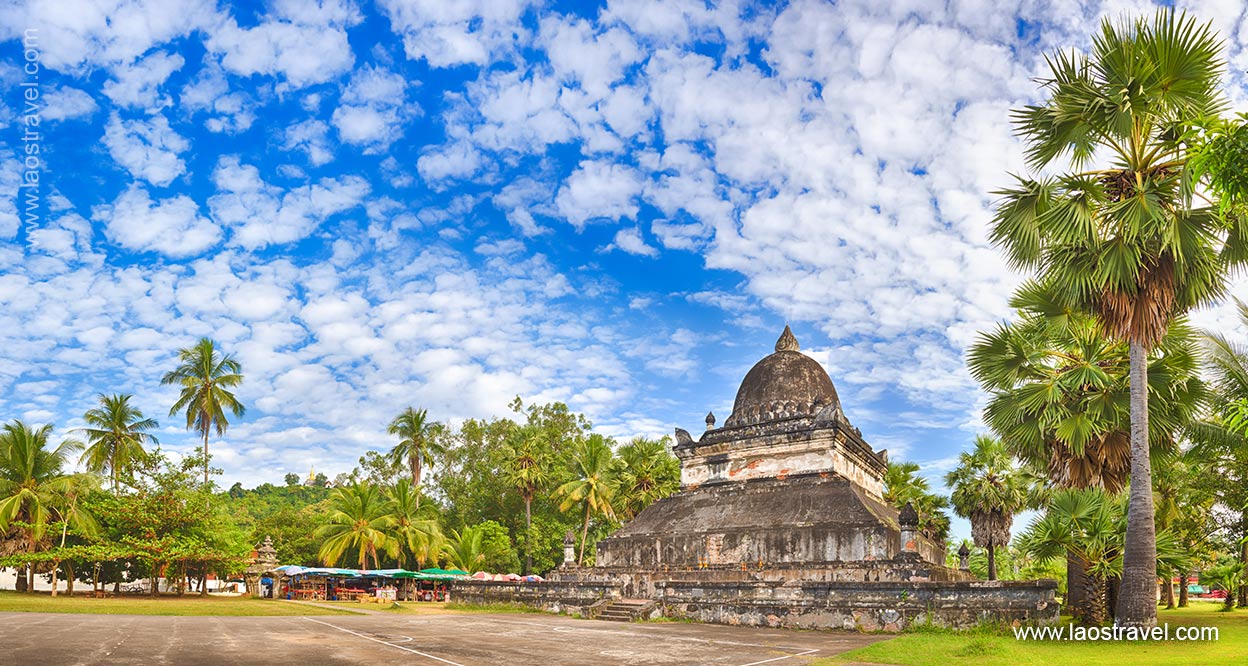 The Wat Visoun is the oldest operating temple in Luang Prabang. So, it represents the earliest style of Laos temple architecture. It is also known as Wat Wisunarat, named after the King Wisunarat who ordered the construction of the wat in 1513. It is now served as the city’s Museum of Religious Arts. You can see religious artefacts and precious items related to Buddhism and the royal family. 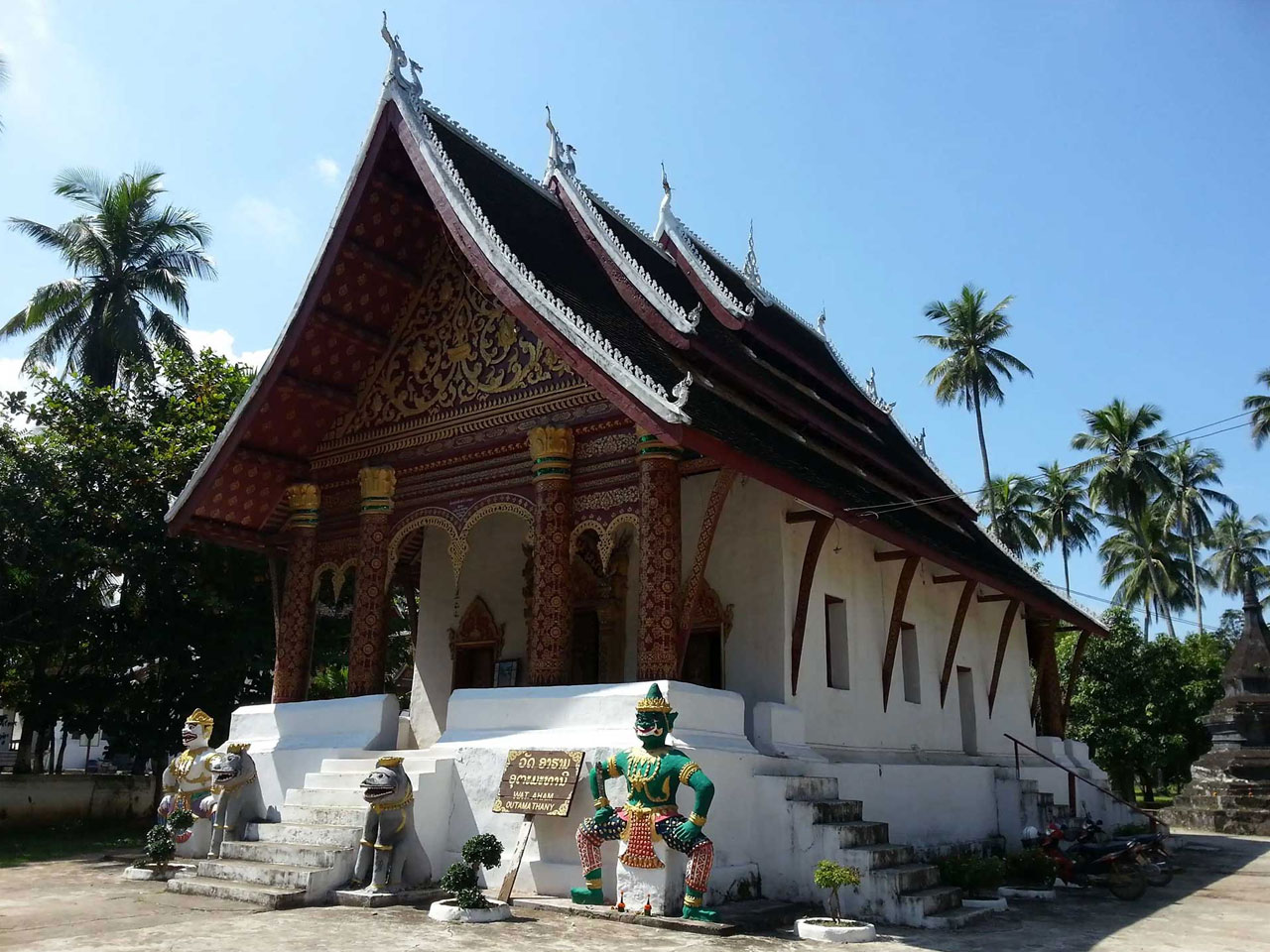 The Wat Aham was built in about 19th century. This temple is known as a place for meditation and meetings of Buddhist. It is becoming more popular with people who are seeking a quiet and tranquil atmosphere. 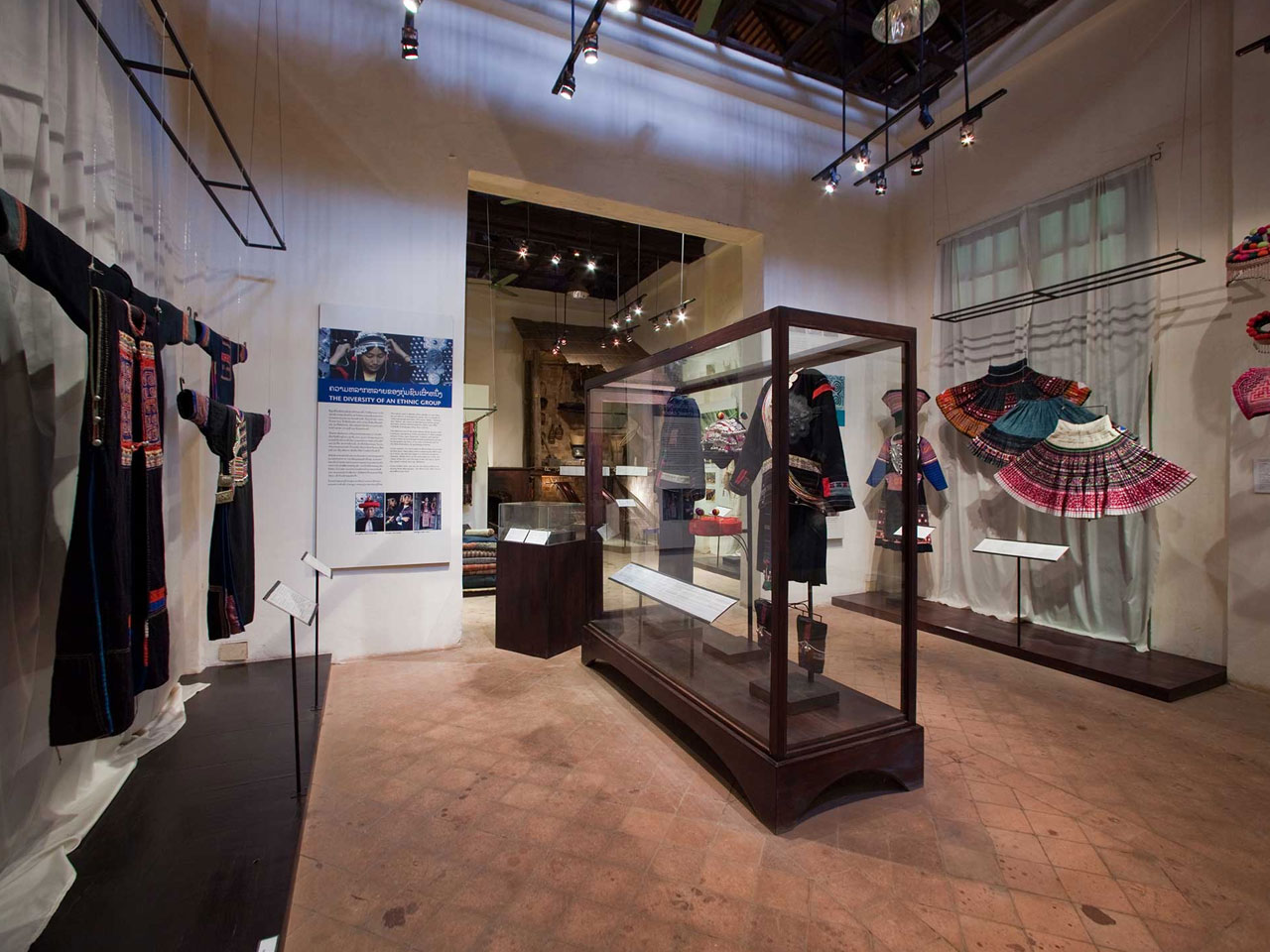 It is the only non-profit museum in Laos. It dedicates to preserve and share the cultures of Laos’ diverse ethnic groups. Permanent exhibitions feature traditional textiles and clothing, jewellery, religious artefacts, handicraft tools, and household objects. 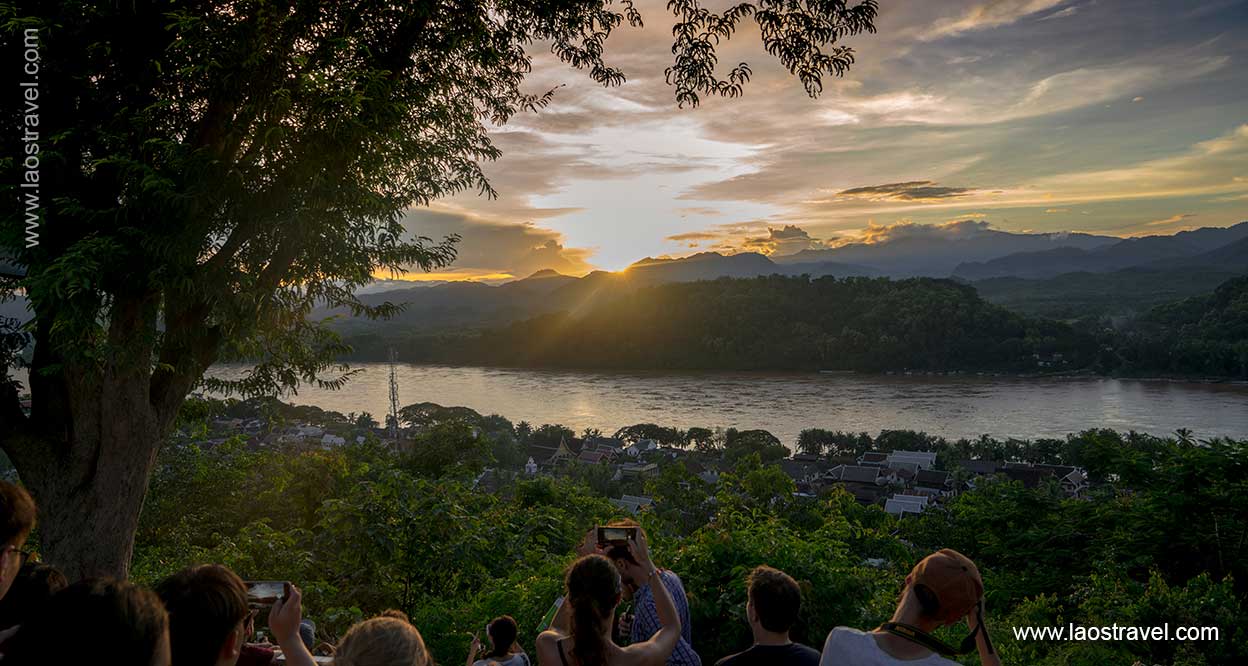 Mount Phousi is located inside the city of Luang Prabang. It’s a 140-meter (450-foot) high hill that is home to several Buddhist shrines and temples. It’s a good place to watch the sun rise or sun set over this Lao city. 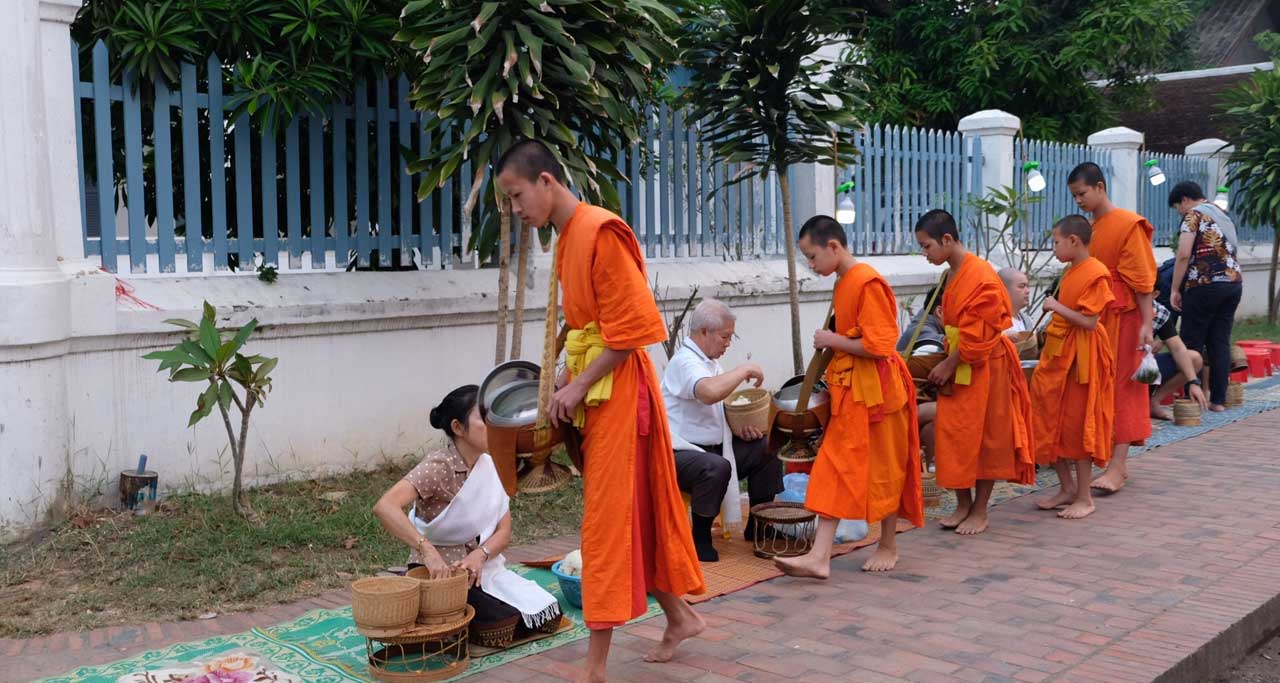 Luang Prabang’s alms-giving ceremony is a longstanding tradition in Laos Buddhist culture. It takes place daily as the sun rises. It begins on the main street of Luang Prabang then spread out to all the side streets. The monks in orange robe walk in silence to collect foods which people offer. 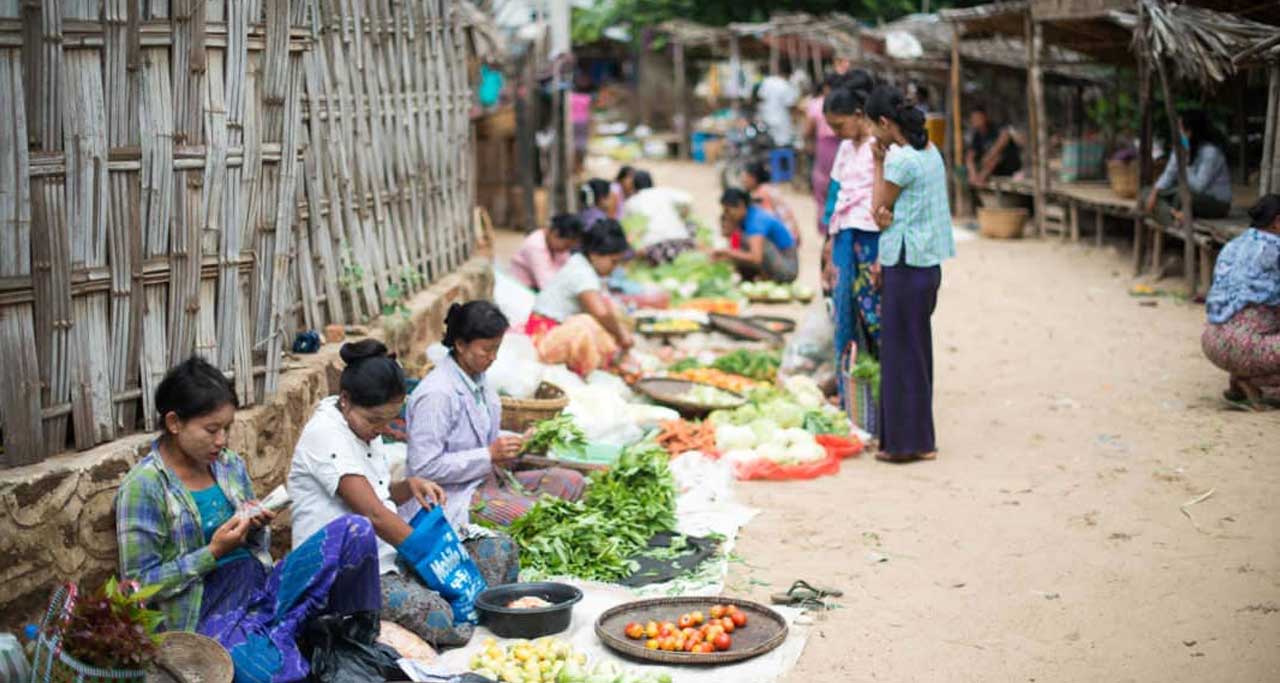 It is the market toward local people. You’ll see many locals buying their groceries for their daily life. Vendors sell all manner of produce such as galangal, kefir leafs and lemon grass, fruits or live animals 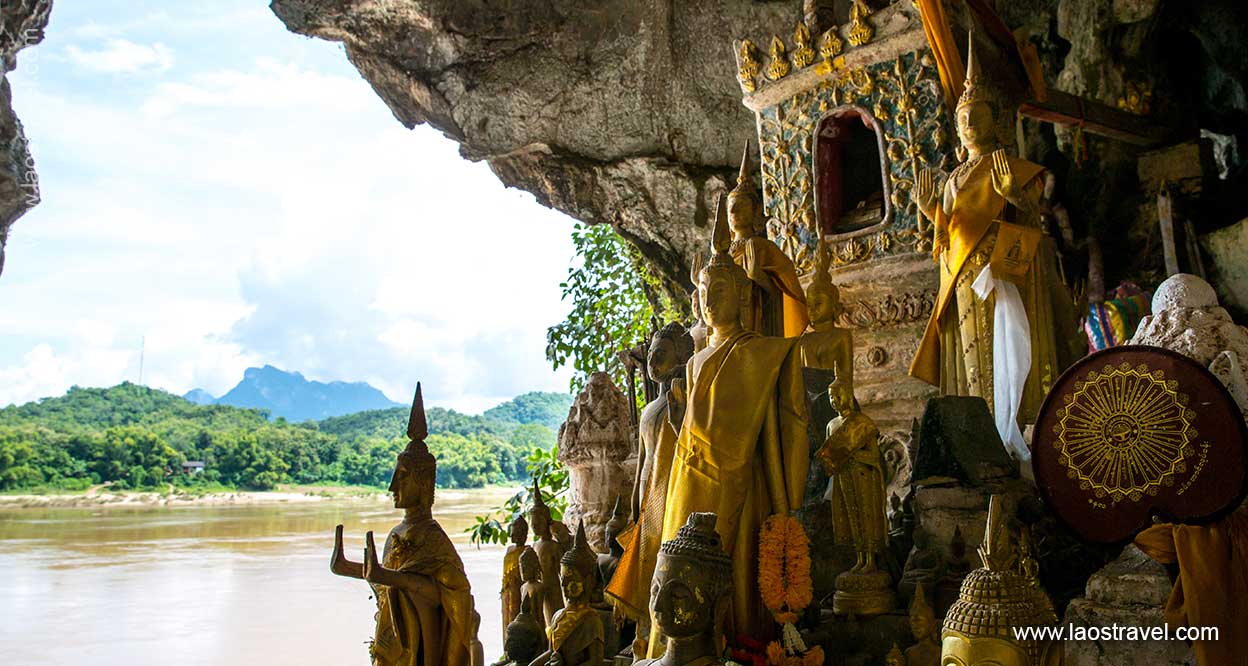 Pak Ou Caves is 25 km north of Luang Prabang. There are 2 caves to visit: a lower cave called Tham Ting and an upper cave called Tham Theung. Both serve as shrines to the river spirit and Lord Buddha. There are more than 6,000 retired Buddha images in different size, shape, position and composition within the caves. 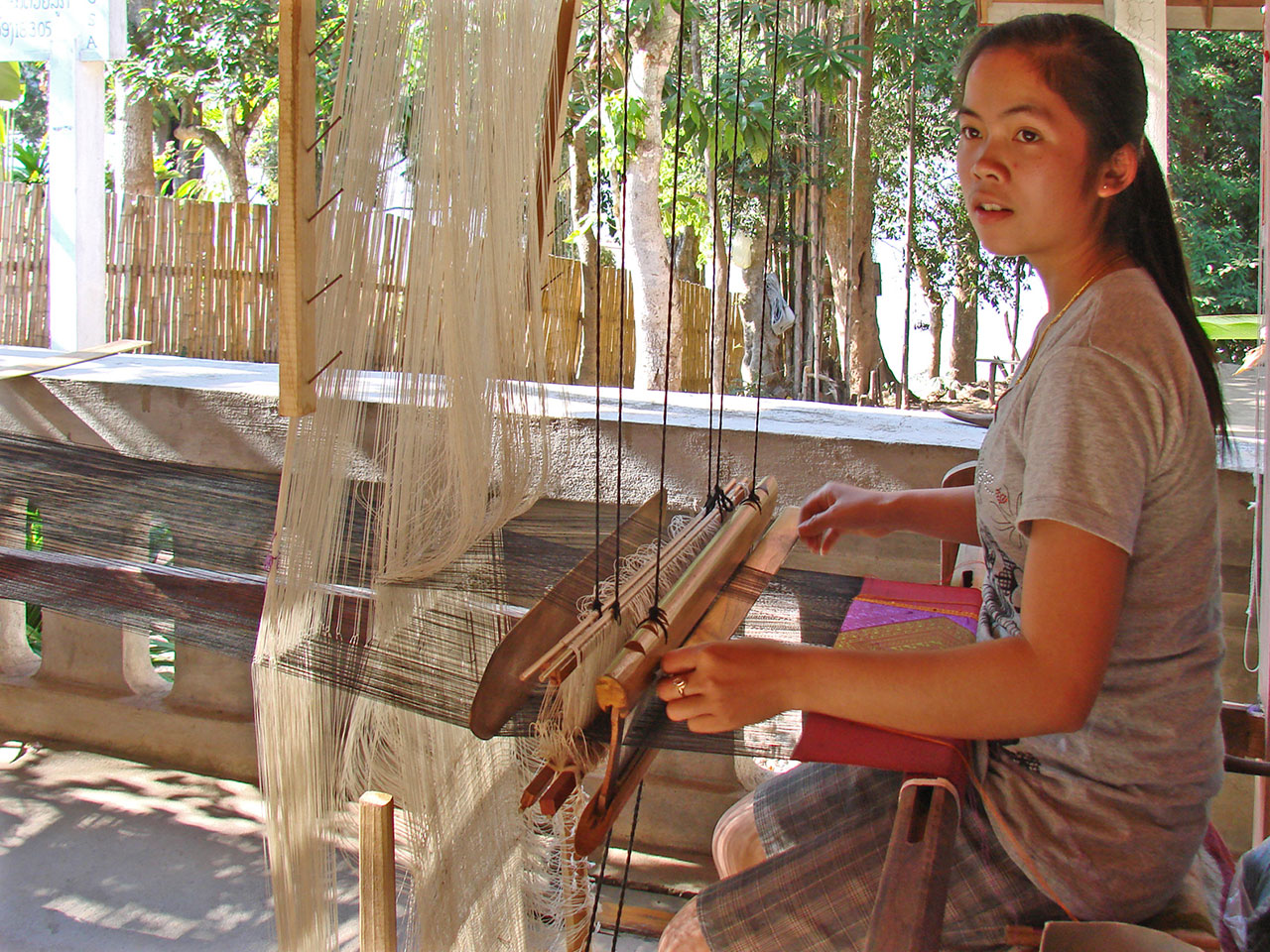 It is a charming village located 5km East from the heart of Luang Prabang city and on the banks of the Mekong River. It is very famous for its traditional Sa paper making, a kind of specific and unique paper in Laos. It is made of fresh flowers, leaves and bark of the mulberry tree. 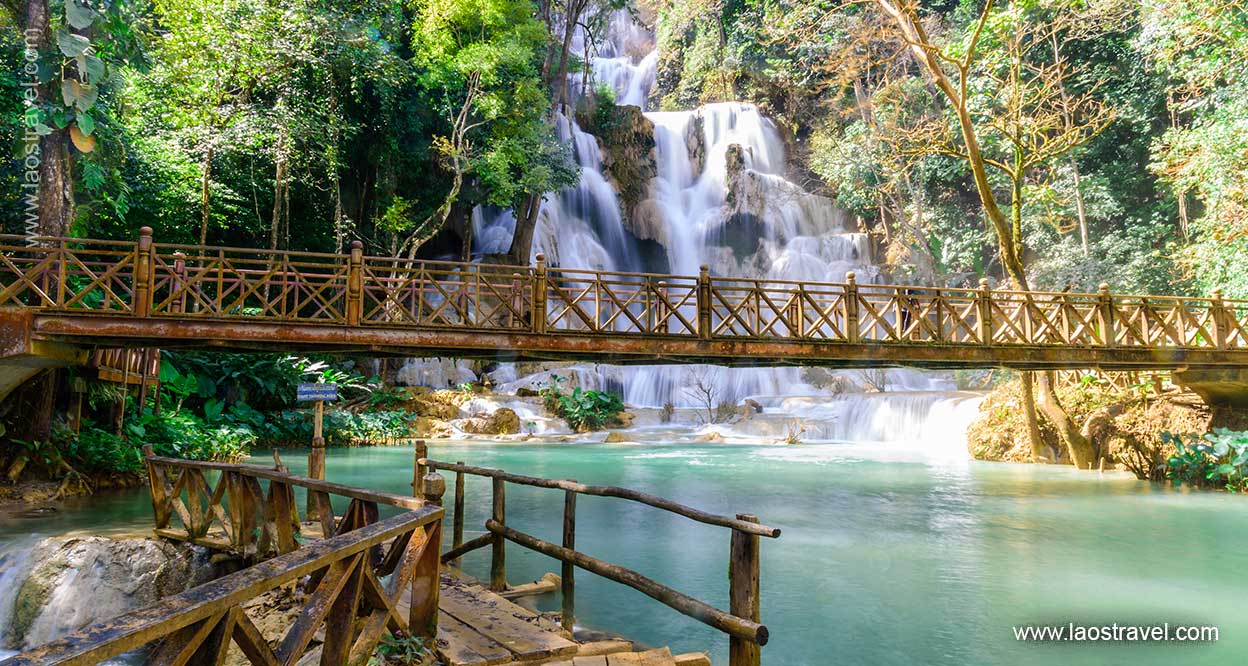 Located 30 km south of Luang Prabang, Kuang Si Waterfall is one of the most interesting attractions for a day trip. It is the biggest one in the Luang Prabang area with three tiers leading to a 50-meter drop into spectacular azure pools. Travelers can climb to the top to see the stream feeding into the falls, then fall to a pool for a swimming. 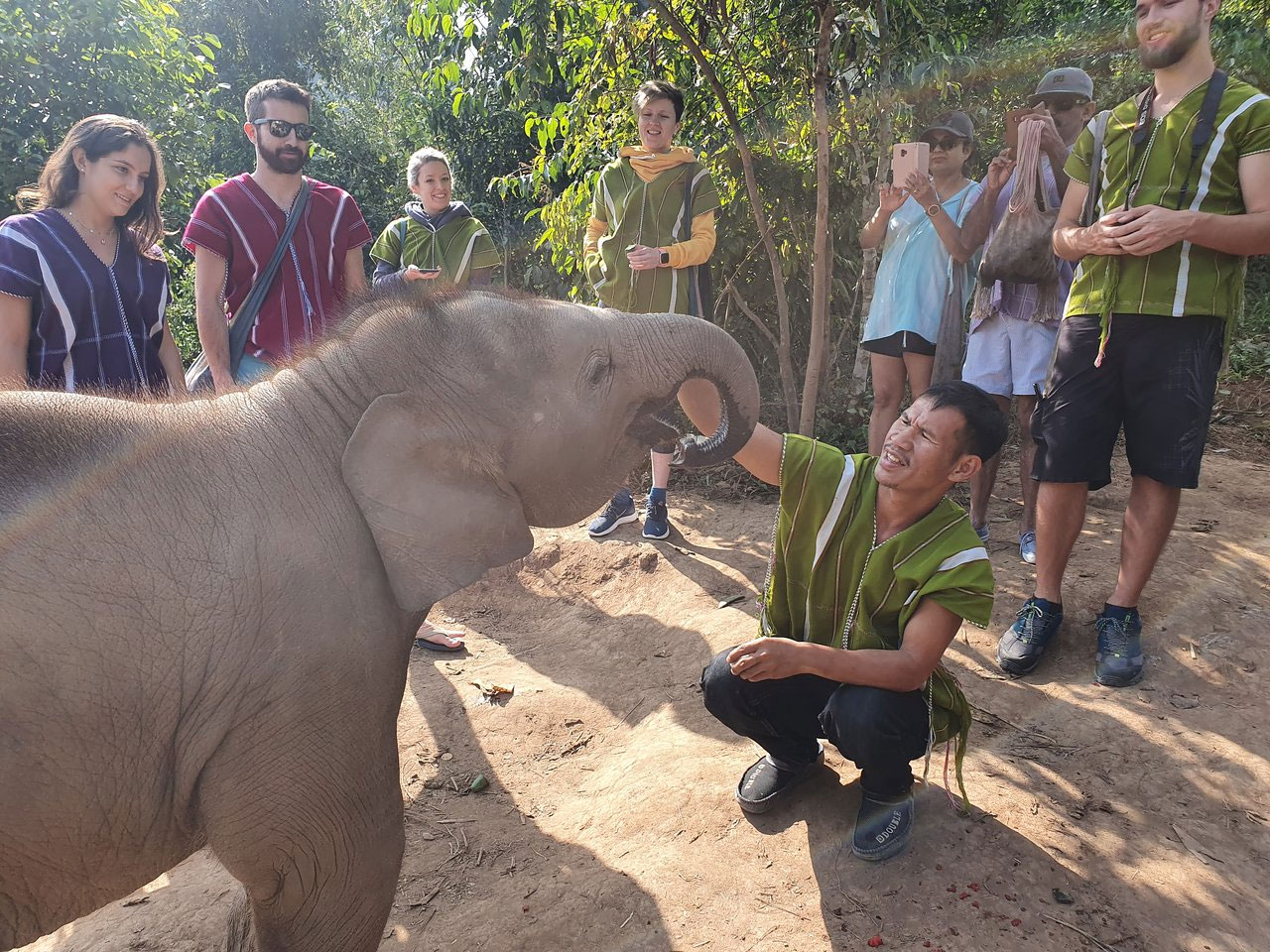 It is the ideal place for travelers who love animals. Its purpose is for the rehabilitation and protection of elephants. The Sanctuary is located about 15 km from Luang Prabang on the bank of River Nam Khan. It offers an outstanding variation of Elephant activity tours for the young as well as for the old people. 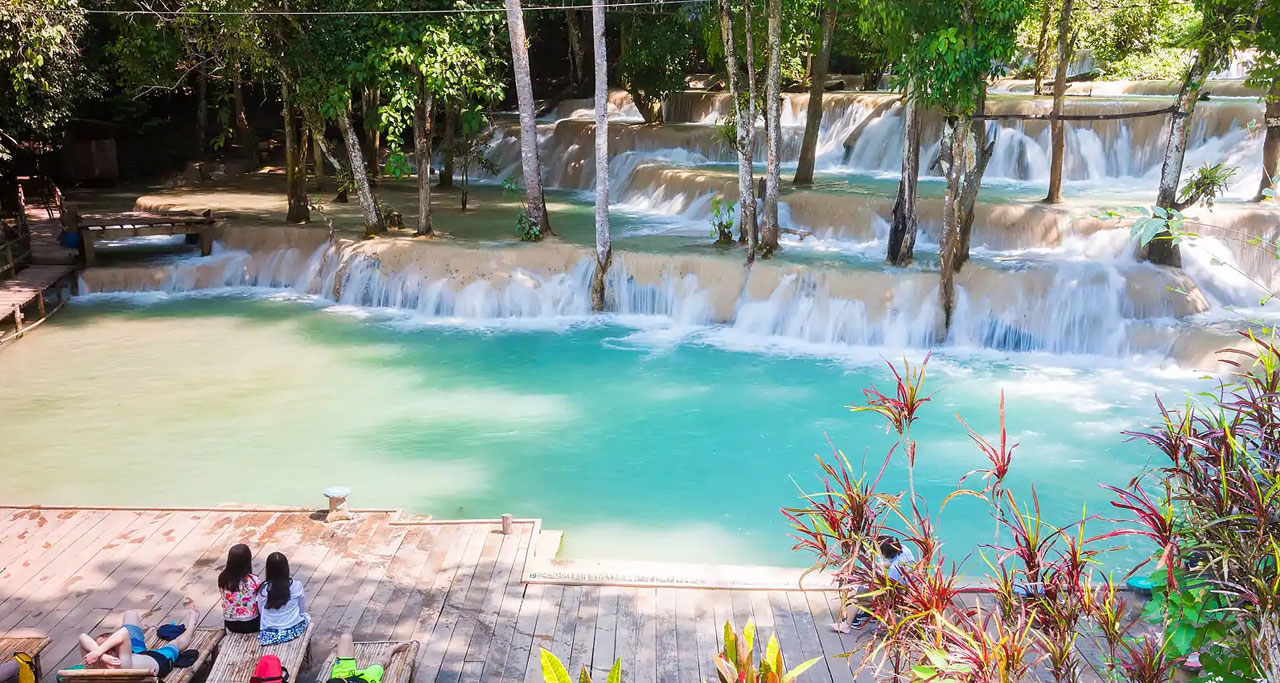 Tad Sae Waterfall is not as famous as Kuang Si waterfalls, though it’s quite popular with locals. It’s a bit harder to get to, involving a tuk tuk to the Nam Khan River and then a 10-minute boat ride. The main reason to visit is for the swimming as it’s nicer than other waterfalls. Besides, you can have an opportunity to swim with elephants. 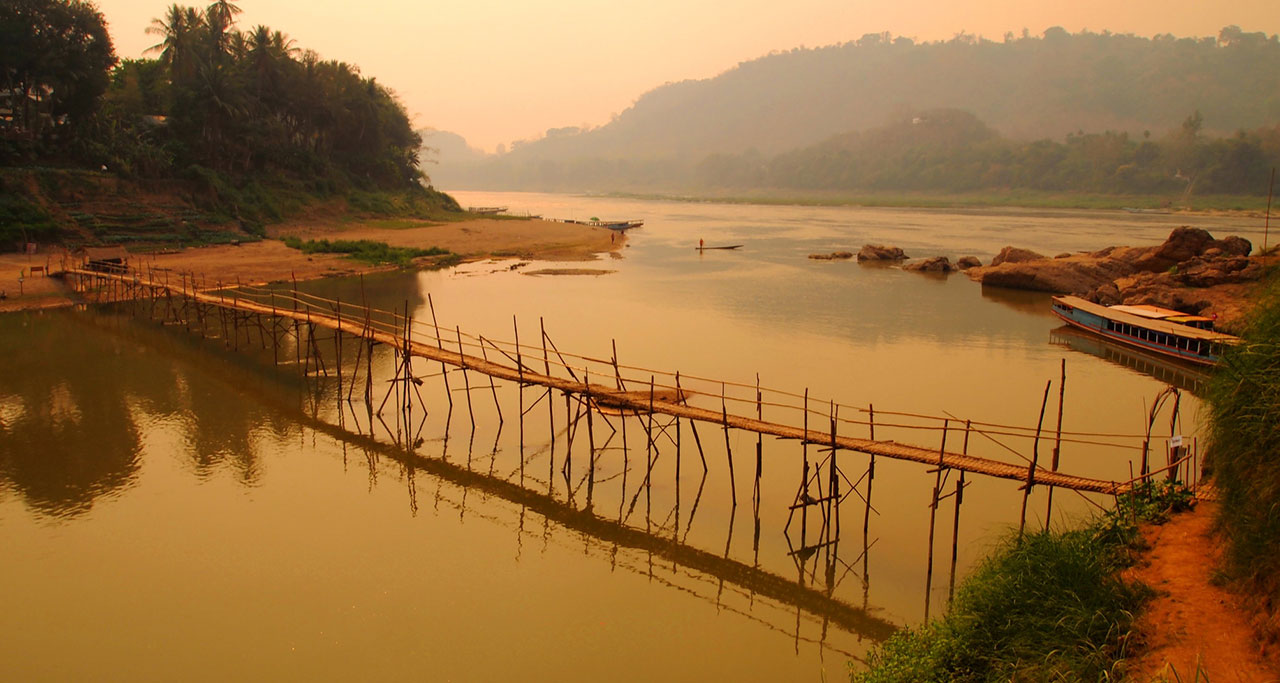 Many travelers are curious with bamboo bridges in Luang Prabang due to its unique construction. In the rainy season, a bridge will be removed. When dry season comes, it is restored to serve local people in moving between two sides of river.

Laos Travel offers many options of short excursions which cover these interesting sites. Please contact us and let our experienced team to help you to arrange a wonderful visit.