As a hidden gem among South East Asian countries, people think of Laos as a peaceful country with gentle and warm people, a pilgrimage to Buddha land, together with the cultural diversity, customs, cuisine, arts, festivals, etc. So, Laos deserves one of the highlight destinations of any visit.

Thus, for any trip plan to Laos, one of the top concerns always comes to how Laos Weather becomes on the traveling time? Is this best time to visit Laos? According to the geographic area with most of mountain ranges, highlands, plateaux, and rivers, it shapes Laos climate in variation of different parts of the country and different times of the year.

Knowing the necessary information of how weather of Laos looks like will help you to make the suitable decisions of the right travel time of the year and get the most enjoyable trip in Laos at its best. Let’s learn with Laos Travel!

While Laos has a typical tropical monsoon climate, the weather system of Laos is relatively straight-forward compared with much of Asia; consisting of a dry season (November to April) and a wet (rainy) season (May to October) with the variations in temperature. The dry season itself can be further divided into 2 periods: cold dry season (November to February) and hot dry season (March to April). In fact, March – June become the hottest time of the year as the presenting of dry months leading to the wet season and the early start of the wet season. 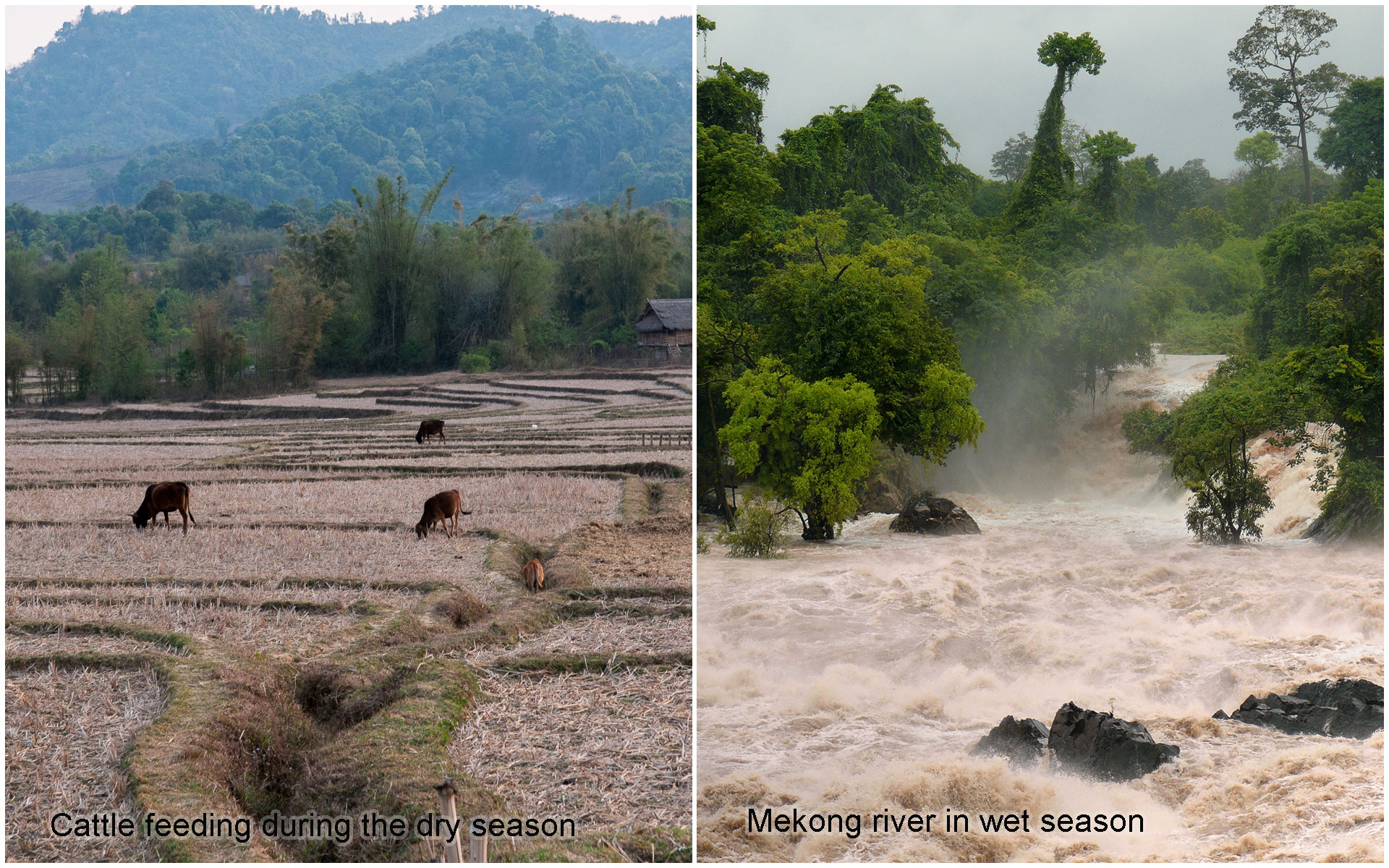 Dry season (November to April) and Wet season (May to October) are two distinct seasons of Laos.

From mid-May to mid-December, Laos can also be reached by typhoons which are tropical cyclones of South-east Asia coming from the South China Sea. These tropical cyclones together with waves of bad weather brought by the monsoon can cause flooding, and the North is more often hit than the South.
Cold season is great f

The temperatures in Laos are affected by the altitude with an average drop of 1.7 °C for every 1000 feet (or 300 meters). As a general rule, the North – Central and Eastern regions are at a higher altitude than those in the South, where at its lowest – the Mekong River valley. 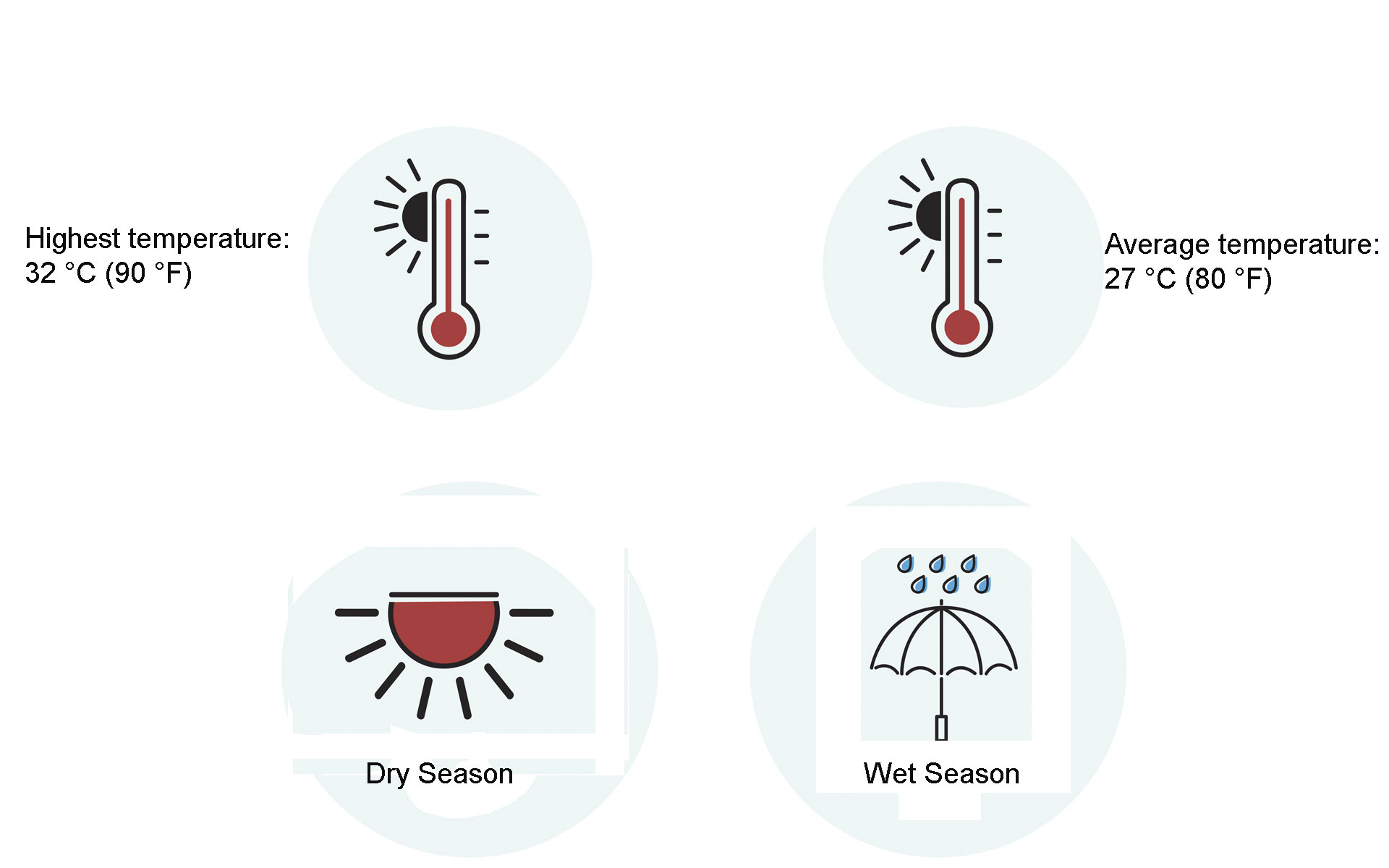 The altitude affects the temperatures in Laos.

In dry season, the temperatures are cooler towards the beginning of season, then gradually increase by two end months. The coolest month comes to January while the average temperatures of cool months from November through February are between 16 and 21 °C (60 and 70 °F). In March and April, the temperature can come up over 32 °C (90 °F), turning them into the hottest months of the year.

During wet season, the average temperature is around 27 °C (80 °F). In early months of the season, the temperatures remain very hot and the rainfall often comes in short spurts. In next months, especially in August-September, the rains become more constant and heavy. An average rainfall can reach 1,300 to 2,300 mm (50 to 90 in), and Southern Laos even recorded the highest rainfall of 4100mm on Bolaven Plateux on Champasak Province.

2.1. Weather of the North Laos

(includes the villages in the hills, mountains and the ancient capital.)

During cold dry season of November through February, the northern regions cool down and can even approach freezing at higher altitudes, especially in coolest months of year from December to January. During this time, the sunshine is less and the sky is often cloudy. In the further North of mountainous areas, there is often dull weather with some drizzle. 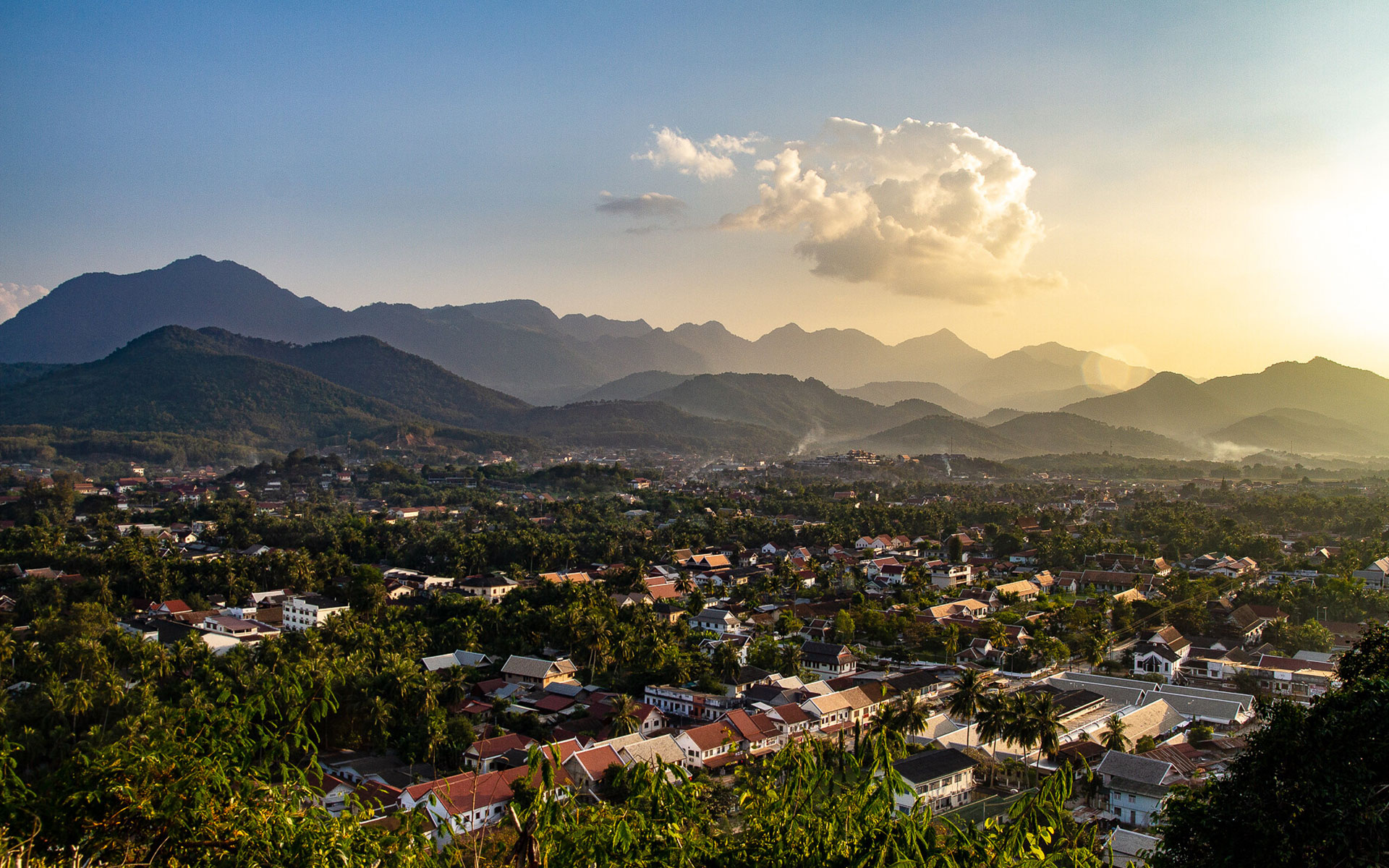 For March and April which are hottest period of the year, this is also in the burning of the fields so the air can be as smoky and cause discomfort for breathing until the monsoon season starts in May. The temperature of this period can exceed 32 °C (90 °F), and also expect the waterfall around Luang Prabang to be in poor conditions.

When the wet season comes, the sun comes out so often. Further North and in Luang Prabang, rainfall tends to be lighter and you can often expect rain during the nights or mornings with some relatively clear afternoons. However, if at peak rainy time (August / September), you can be prepared to some delay and occasional floods.

2.2. Weather of the Central Laos

(includes the capital Vientiane and the countryside.)

Central Laos is where the capital Vientiane is situated and this part of the country also attracts more and more coming to discover the natural attractions and outdoor opportunities of the nearby Vang Vieng and Plain of Jars. 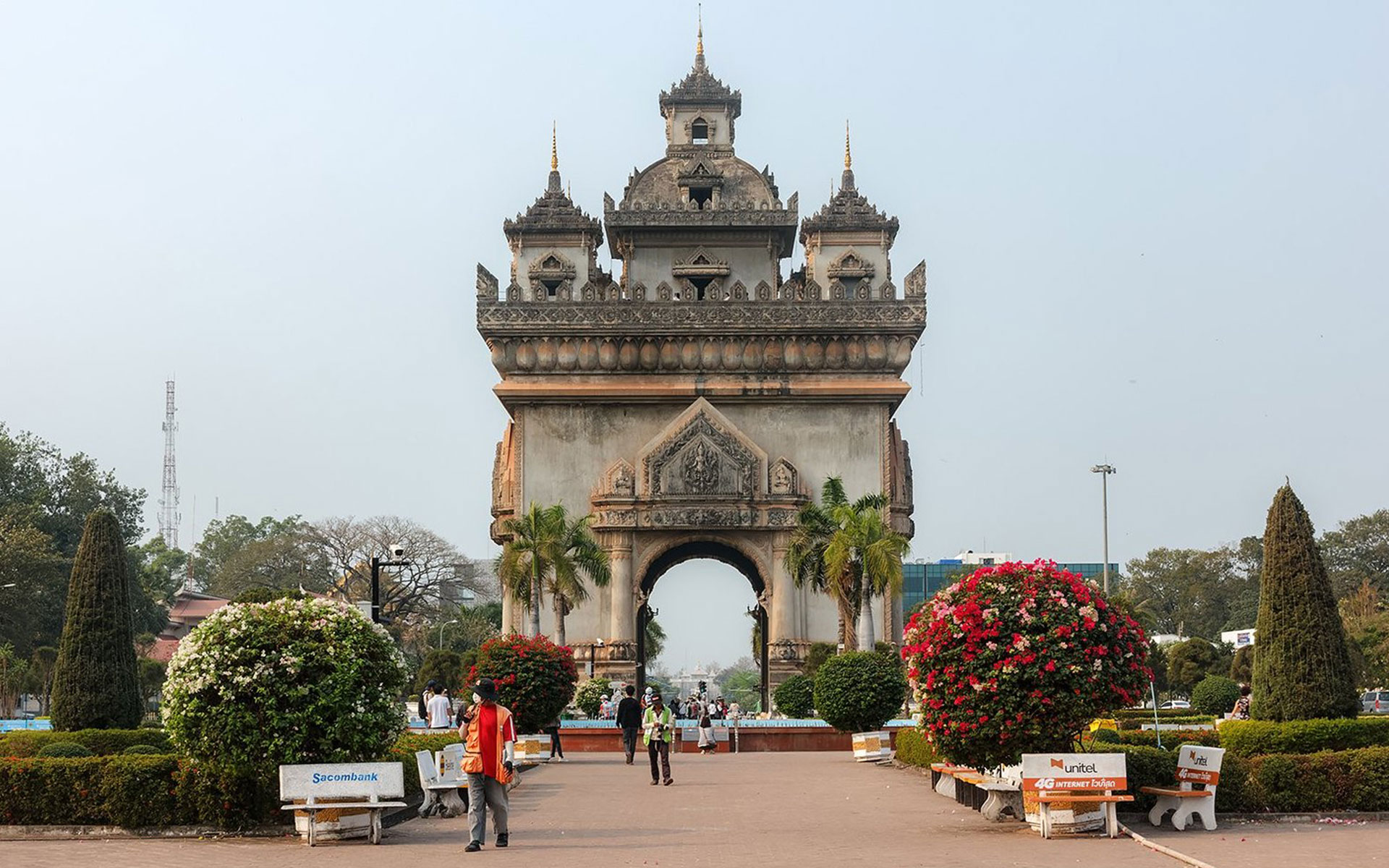 Known as Victory Gate, Patuxai is one of the most important monuments of Vientiane dedicating to those who fought in the struggle for independence from France.

Early dry season gives the best time for those who are looking for the nature as everything is still lush and impressive. The sun frequently shines and low temperature is great for trekking experience. In Vientiane, you can expect temperatures between 30°C – 38°C in hottest seasons which starts in March and high levels of humidity in wet season from May. The rainfall can be 1,600 mm (63 in) yearly which becomes abundant in August and September while they are rare in dry season. The winter temperatures are also slightly higher, and cold air outbreaks are less frequent and less intense.

2.3. Weather of the South Laos

(includes the Mekong Delta, mountains and is the area least visited by tourists.)

In the Southern Laos, there are not much differences between cold and hot season as winter is even warmer with the highs at around 30-31°C (86-88°F) even in December and January. It also never gets as cold as it does in the North at nights. Further South Laos as Pakse, the sun shines more often than in Vientiane and center of the country in dry season, while the rains are abundant with amount to 2,000 mm (80 in) per year or even exceed 300 mm (12 in) per month. 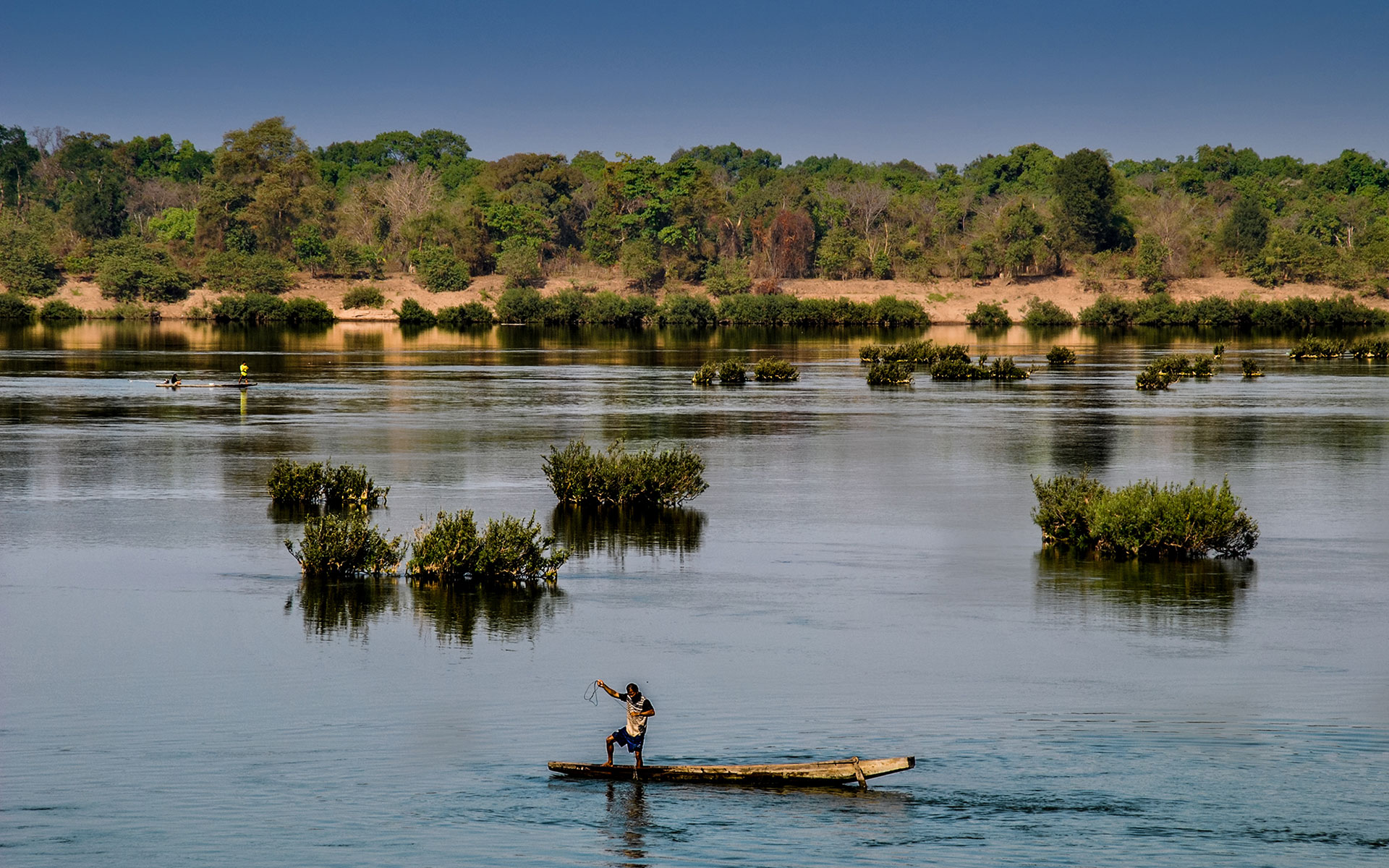 The peaceful Mekong River in Laos.

The rainy season of the provinces near the Mekong is slightly less strong, but the area around the river can still experience the floods. Visit Si Phan Don, Savannakhet and Pakse can be a good destination all year round.

In recent years, Mekong River water levels have been at historic lows during February and March, partially due to global warming and lower rainfall, and more due to newly Chinese installed river dams.

Generally speaking that Laos has two distinct seasons and this country can be visited all year round as each season has its own reason to come and experience. However, the best visited time in Laos is from November to February because it is the coolest part of the dry season which makes the weather perfect for any kind of activity.

If you plan to visit far north of Laos such as Luang Namtha, Phongsaly, Oudomxay, etc., the weather can drop as low as the freezing point so the suitable clothes are highly recommended.

Visiting Laos at its best time (November to February) when the weather is the most pleasant will give you enjoyable feelings.

Traveling in this period, it can be slightly overcrowded in some period. Typhoons or tropical storms may still affect the country, even in the first half of December and the temperature can start to rise since February.

Also note that dry season includes peak season, especially in Christmas/New Year Eve or Lao New Year in mid-April when the travel expenses are expected to increase. Therefore, it is better that you need to make the travel service reservations at earliest stage as possible to avoid full occupancy or lower service quality.

For dry season: A light jacket is enough when travelling in the south while in the north, heavier clothes are necessary in the winter time. Sneakers or trekking shoes are needed if you plan to go hiking while sandals and flip flops are everything you need to move around towns. A good sun screen with high protection is always needed against the heat of tropical sun although Laos has no beach. Bath suit is a must for a dip in a waterfall or in the river, but modest one is suggested to pay respect to the local people who often get fully clothed while swimming. 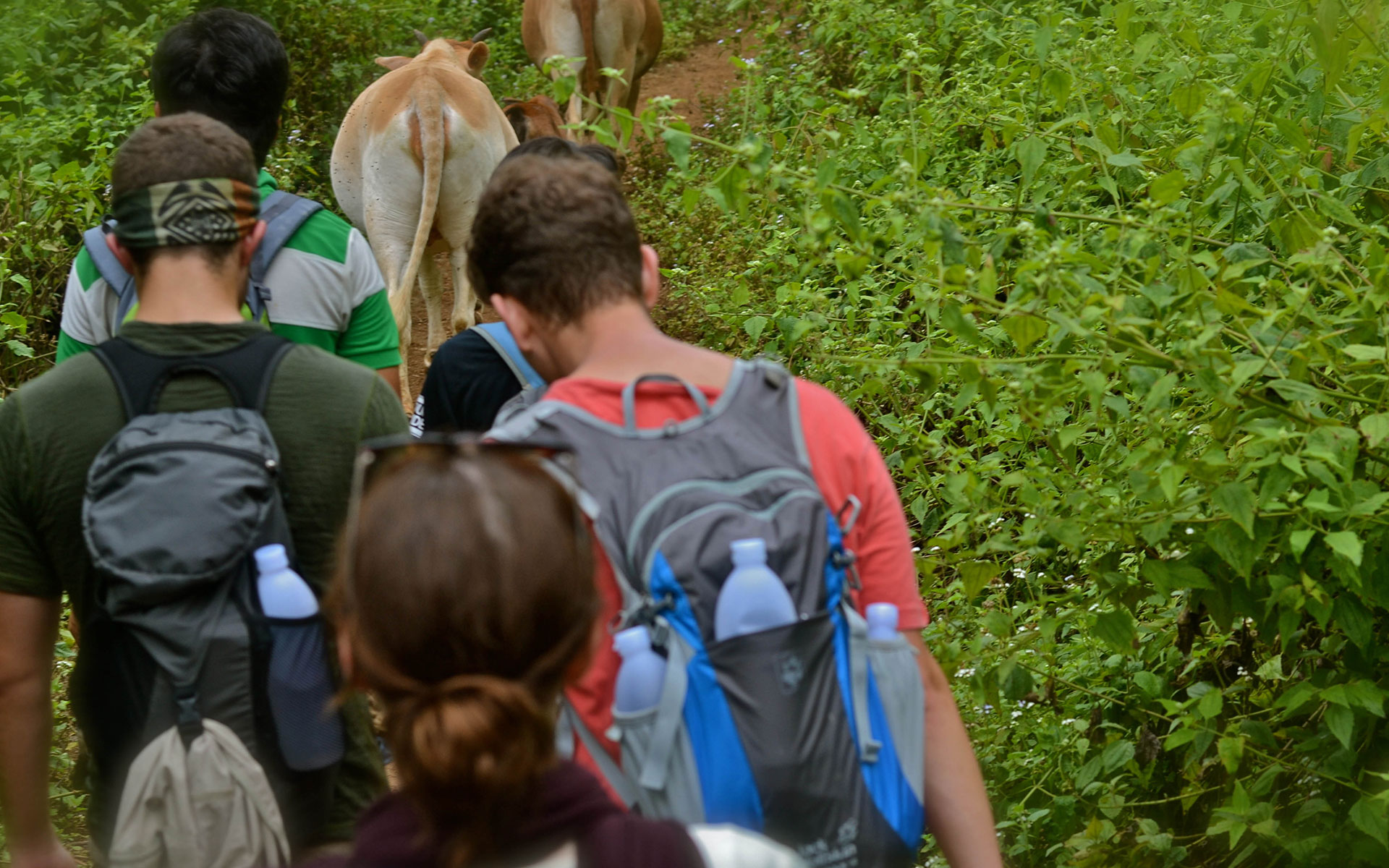 Depending on your travel time and style, you can have the suitable preparation and packing for the most comfortable journey while in Laos.

For wet season: Lightweight clothing of natural fibers, light raincoat or umbrella, and light sweatshirt should be in your package. Warmer clothes are still necessary if you are in mountainous areas, especially for early mornings or late evenings. During this season, mosquito spray is highly recommended to prevent you from the nasty mosquitos or you can wear long cotton trousers to protect your legs better at night. Leaches socks are good choice if you’re going trekking during the rainy season.

Dress neatly when entering the temples in Laos. Women are required to cover the shoulder and knees while men should avoid sleeveless t-shirt. Also remember to remove your shoes before entering any Laotian home or temples as it is customary.

To summarize, every weather type in Laos has its own strength and advantages which can probably surprise you when exploring the whole country. Your Laos trip will be great as its way of traveling time, type of weather you love, things you want to do, and how much or less that you’re into crowds. Contact Laos Travel today to get a free assistance regarding useful travel advisory and the most suitable itineraries!