The first passenger bullet train, named Lane Xang, set to travel along the newly completed Laos-China Railway, also referred to as the China–Laos Railway or the Boten-Vientiane Railway, was delivered to Laotian operator in Vientiane on Saturday, 16 October 2021. The streamlined “China-standard” bullet train, or the Electric Multiple Unit (EMU) train, designed and built by Chinese companies, can run at a speed of 160 kilometers per hour. They will be operated by the Laos-China Railway Company, a joint venture for the railway’s construction and management in Vientiane. 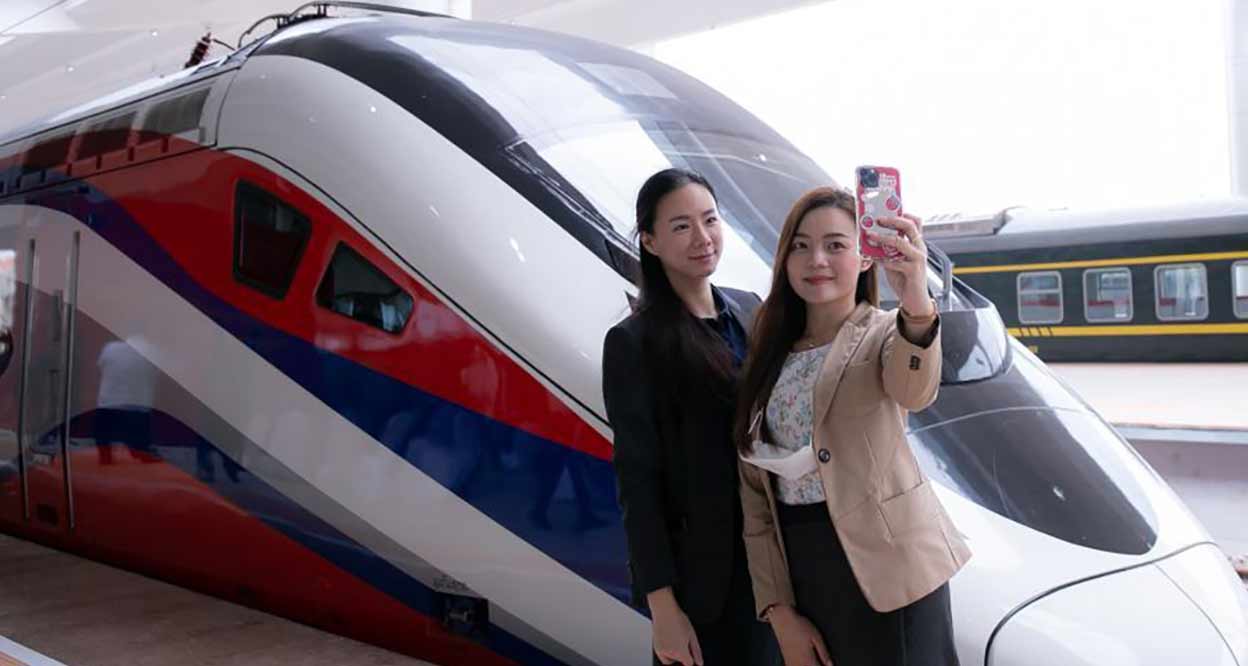 The express train has been named Lane Xang as Laos was once called the Lane Xang (million elephants) Kingdom. Lane Xang, also known as Lancang, the name of the upper section of the Mekong River in China, symbolizes the China-Laos relationship as good neighbors, good friends, good comrades and good partners. The train’s exterior is painted in red, blue and white to represent the colors of the national flag of Laos, while the interior is adorned with patterns of Dok Champa, a national symbol of Laos. With a handling capacity of 720 people, the train’s carriages are equipped with snack and beverage bars, facilities for people with disability and information services in Lao, Chinese and English. 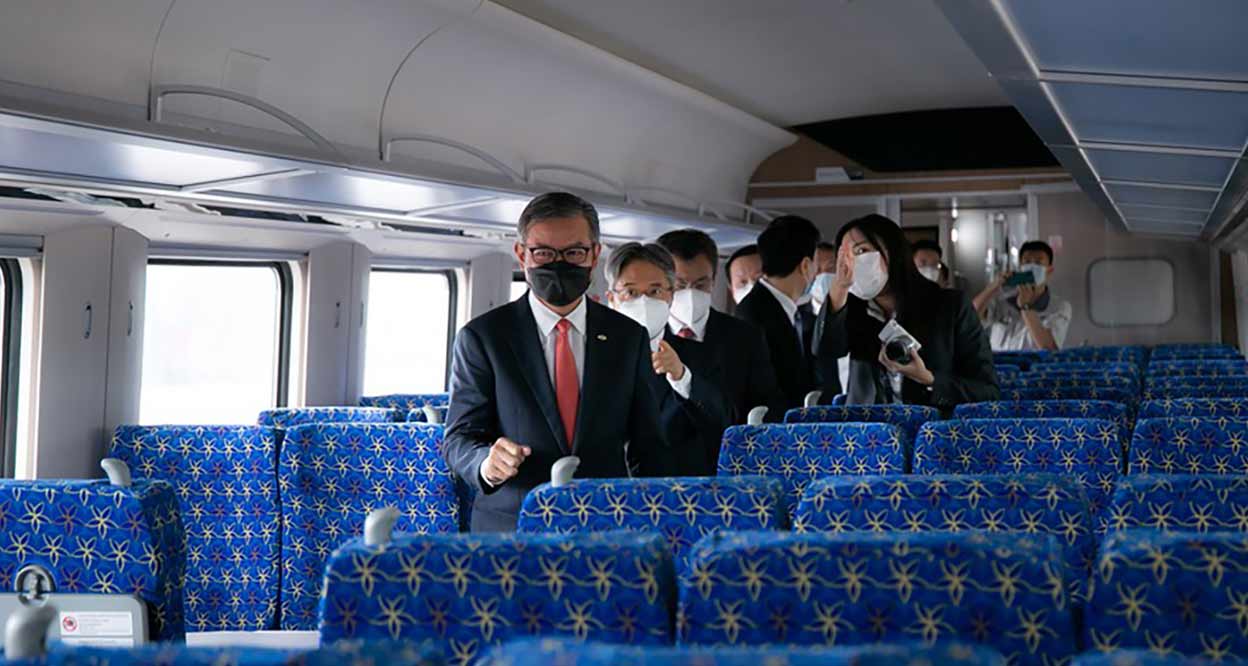 Laos is the only landlocked country in South East Asia, which gives it a competitive disadvantage in trade. During the French rule, the French failed to materialize a possible plan to build a railway in Laos, with only the 7 km Don Det–Don Khon Railway being completed. A railway link through Laos would greatly reduce cargo transit times and transportation costs between Laos and China. The railway would also be a link in the Kunming–Singapore railway network, as well as a program within the One Belt One Road Initiative of China.

Construction of the railway began in December 2016 and is scheduled to be complete and operational in December 2021. In the north the line will be connected to the Chinese rail system in Mohan, through the Yuxi–Mohan Railway. In the south it meets the existing metre-gauge railway in Thanaleng, linking it via Nong Khai in Thailand to Bangkok. A high-speed, standard gauge extension to Bangkok is also under construction – and scheduled for completion in 2028. When finished, the Boten–Vientiane Railway will form an important part of the Kunming–Singapore Railway.

The 422.4-km railway is also expected to boost tourism in Laos with passenger traffic to account for the majority of traffic on the line, and to cut the cost of transport through Laos by 30-40 percent compared to travel by road. Travel between Vientiane and Kunming over a distance of 1,022 km is expected to take less than 10 hours, compared to 30 hours by bus.

Test runs for the train will begin shortly ahead of the official opening of the 1,000-km railway line on December 2, the National Day of Laos. 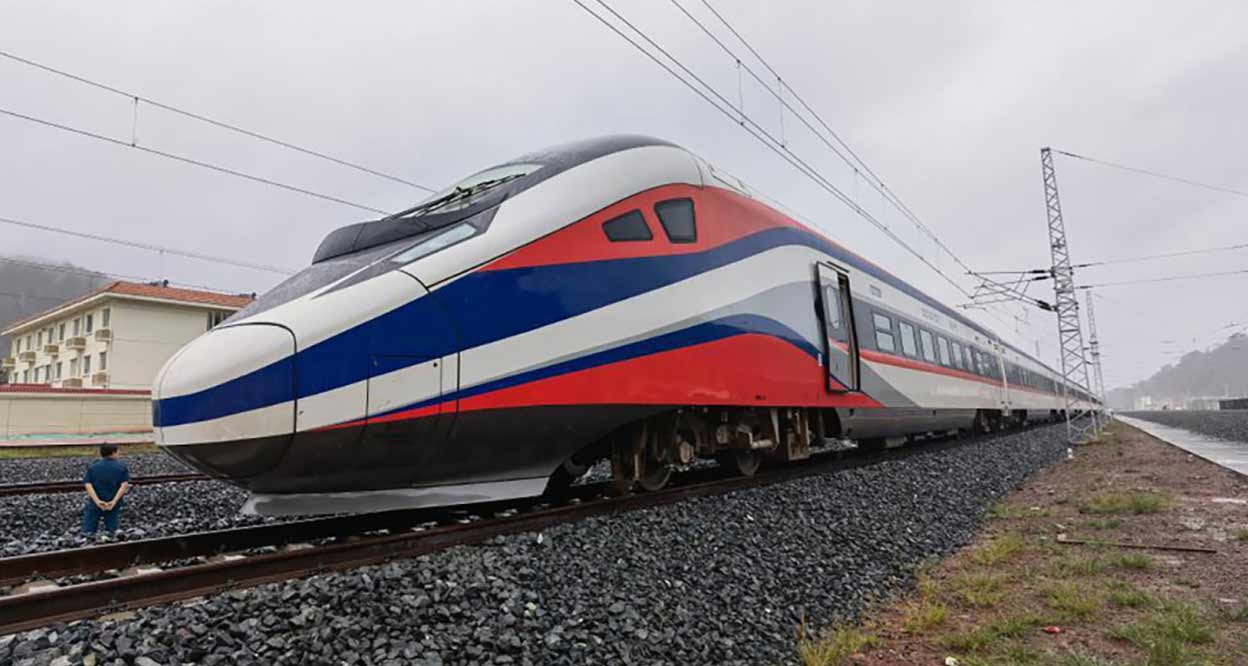 There are 32 stations along Laos-China Railway line. Below is the list of 20 main stations of Laos express train, including 10 passenger stations and 10 cargo stations:

Three trains a day are running within Laos as shown above. No passengers are currently crossing the border to/from China because of Covid-19.

Vientiane station is some 14 km from central Vientiane, about 30 minutes by taxi.

We want train ticket from Luang Prabang to Vientien do you have Chinese Express train how much to ticket per person how long is the train ride.
Is there any other way that we can contact you easier than Sending message this way

How do you book tickets for this express train?

I’ve tried 12Go and baolau but neither website can give any ticket options for Nov 2022 from Oudomxay to Luang Prabang.

Dear Sir/Madam please let me know how could we do the reservation for the train. We wants to travel from Vientiane to Luang Prabang on December first week.
Thanks and regards
Soumitra Sasmal
Calcutta
India

Do you have service to booking train ticket?

Good morning,
I am planning a tour in wonderful Lao and want to use the new train from Vientiane to Luang Prabang and return.
Can you please submit an actual time table? Or please send me the appropriate link.
Thank you and best regards from Germany.
Gregor Schneider