What languages are spoken in Laos?

Located in South East Asia, Laos is a landlocked country bordering with Thailand, Myanmar, China, Vietnam and Cambodia. This is also one of the world’s few remaining communist states and most Laotians live in rural areas, with growing rice as main agriculture working (approx.80%). Global migration and conflict have resulted in the current ethnic composition of Laos and the geographic diffusion of its ethnic communities.

So, what language do they speak in Laos? In fact, there are many Lao languages spoken by different ethnic groups. So far, more than 80 languages have been recorded in Laos and all are dialects. However, Lao or Laotian, one of the Tai languages of South East Asia, is the official as well as the dominant language in Laos. In this article, Laos Travel will bring you more information about languages of Laos. Let’s find out what languages are spoken in Laos with us now.

History of Languages in Laos

The Lao language is descended from Tai languages, closely related family of languages, of which the Thai language of Thailand is the most important member. Due to the expansion of Han Chinese, the pressures from Mongol invasion and a search for suitable lands to wet rice cultivation, the Tai peoples made the migrations south towards India, the Malay Peninsula and down the Mekong River valley, which was preserved as the oral history in the legends of Khun Borom. Earlier groups of Austroasiatic (*) and Austronesian languages (**) were pushed or absorbed by Tai speakers in what is now Laos.

(*) Also known as Mon-Khmer, Austroasiatic languages are a large language family of Mainland Southeast Asia as well as parts of India, Bangladesh, Nepal, and southern China. Among of these languages, only Vietnamese and Khmer have official status as modern national languages while the rest languages are spoken by minority groups without official status. With long recorded history like Vietnamese and Khmer, the Mon language is a recognized indigenous language in Myanmar and Thailand. Nowadays, there are around 117 million speakers of Austroasiatic languages.

Lao script or Akson Lao is the primary script used to write the Lao language and other minority languages in Laos.

Lao or Laotian – the official language of Laos

The Lao language belongs to Tai languages which are a branch of the Kra–Dai language family.
Of which, the Tai-Kadai languages are the most widely spoken in Thailand, Laos, Myanmar and Southern Chinese. Having close similarities to Thai, the majority of Laotians understand spoken Thai and Lao literate people can read Thai. Now, the primary language of the Lao people is also spoken in the Northeast Thailand, referred to as Isan language.

Although there is no official standard, Vientiane Lao has become the de facto standard language which is the most widely spoken language in the country and the Lao vocabulary is founded on it. More than half of the country’s population (about 52%) speak Lao and an estimated 3.3 million people can speak Lao in the world.

Most of the Lao dialects possess six tones including low, mid, high, rising, high falling and low falling. With similar sound, that word or syllable has a different meaning in different tone or pitch which is often hard to pick up for untrained ears. It primarily consists of native Lao words, but also includes a number of borrowed words from Pali (the language of the Buddhist scriptures, related to Sanskrit) and from Cambodian.

Like many languages, Lao has its own alphabet and there are 28 vowel sounds are presented in the writing system from the combination of 26 consonant symbols and 18 vowel symbols. The Lao script was developed from the Khmer script which has its roots in the Indian Brahmic script, and its arrival was attributed to the Theravada Buddhists who were on a mission of popularizing Buddhism in the 14th century. The Lao language is read from left to right.

Besides, the official language of country – Lao is used as an important 2nd language for the ethnic groups in Laos and in Isan, who have their own dialects and languages, to communicate with outsiders.

Besides Lao or Laotian as official national language with 52% of Laos population speaking, there are more than 80 languages used by the other different ethnicities of Laos. In which, the most common are Khmu and Hmong language.  Other Laos minority languages include Akha, Arem, Bana, Katu, Ksingmul, Maleng, Lamet, Phai, Tai Daeng, Phu Thai, Tai Dam, etc. Here we will learn about the two most common minority languages in Laos.

Khmu is the largest ethnic community of Laos with the population of speakers at around 500,000 and live in the five northern provinces: Bokeo, Luang Prabang, Luangnam Tha, Oudomxay, and Phongsaly. The language is classified in the Austroasiatic language family with many closely related dialects such as Kniang, Puoc, and O’du which gathered to create the Khumuic organ.

The Khmu languages ​​differ from the influence by neighboring state dialects, number of consonants and the presence of lexical range which ​​are mostly easy to understand but more difficult in communication between speakers in far geography.

Although mostly used among peer-to-peer people, most of these people are also eloquent in the dialect used by the dominant community in the area, can speak three or four diverse languages. Lao is spoken by them when working with government representatives, dealing with people in the lowlands of Laos, or at schools. 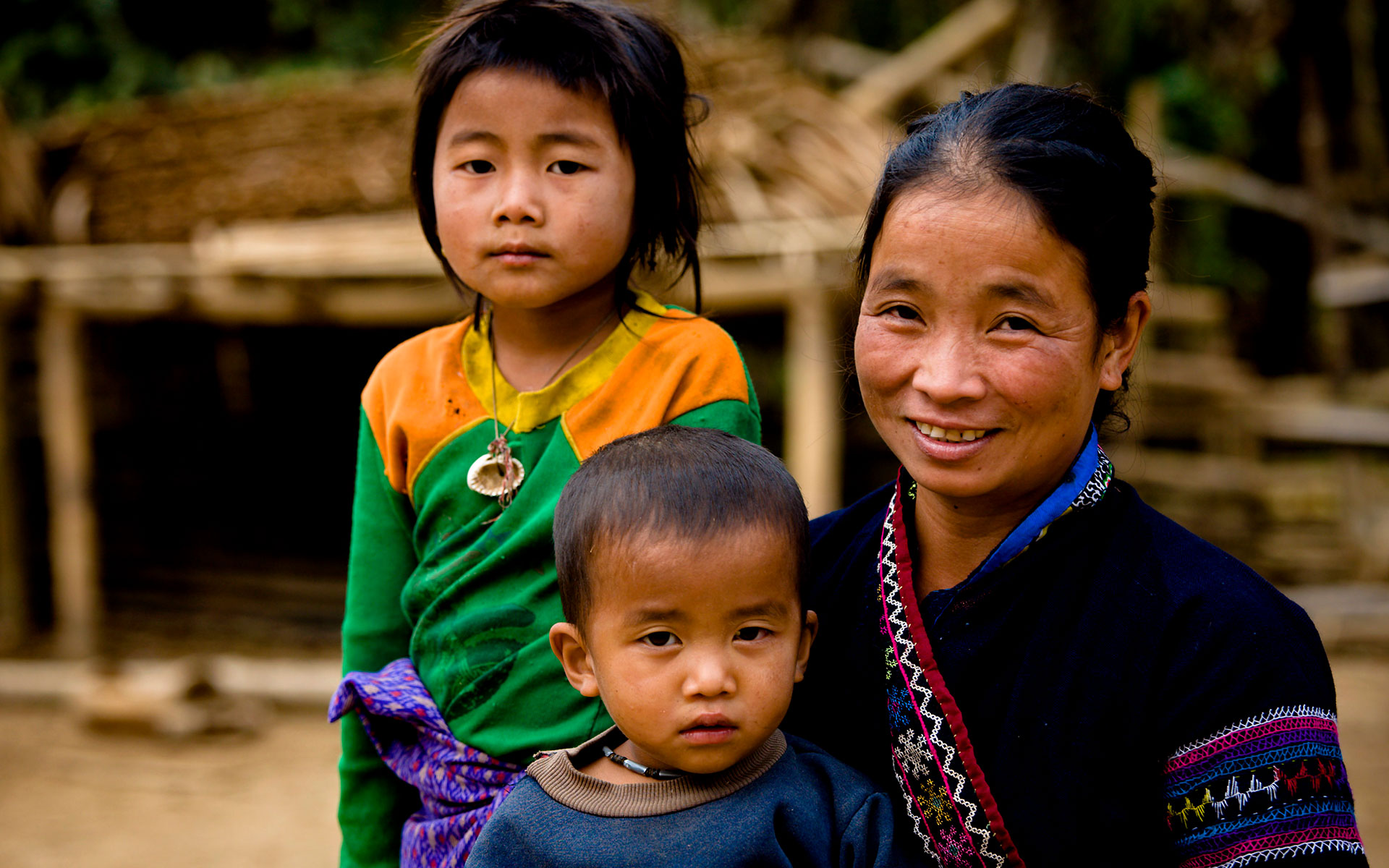 The Hmong language is spoken by the Hmong community inhabiting the mountains of Laos, Thailand, Burma and China, with two main groups: White Hmong (or Hmong Daw) and the Green / Blue Hmong (or Hmong Njua). Although living next to each other, Hmong Daw plays as the dominant language and the Hmong writing system with eight or twelve sounds also reflects the pronunciation of Hmong Daw dialect.

Vocabulary and pronunciation as well as word structure and grammar are the main differences between these two languages. However, both dialects are having a few changes to fit each other better now. Their language is separate but most of them speak Lao. 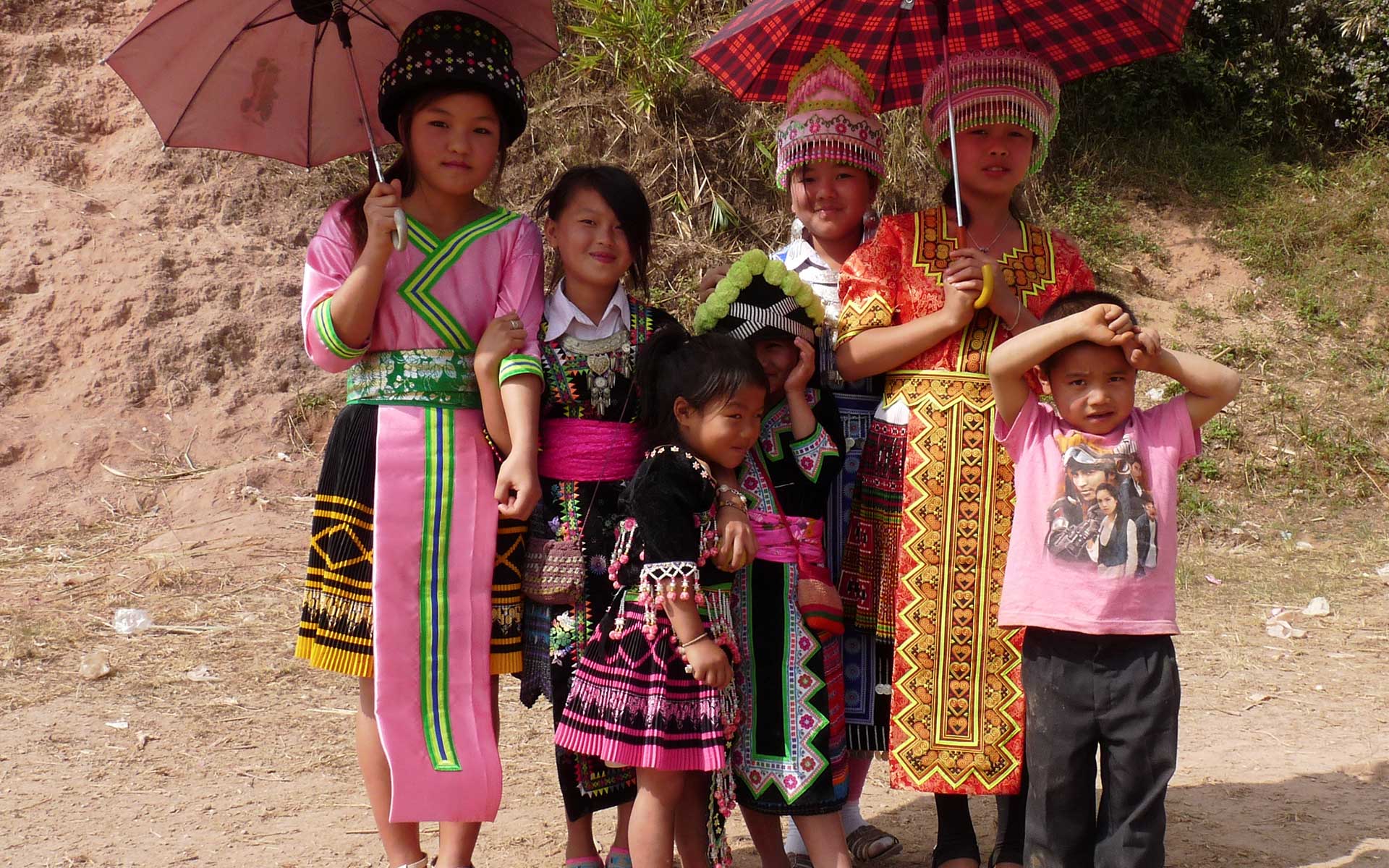 The Hmong people were farmers, most living in small villages high in the mountains of Laos.

Besides the official national language, foreign languages are also in their very important roles in Laos, especially in development of tourism. There are immigration languages spoken in Laos, such as Khmer Chinese who are refugees from Cambodia who fled the war-ravaged country and mostly live in the southwestern region of Laos near the border of Cambodia and Thailand. The others are Lao of Chinese descent, who migrated to Laos from some provinces of China including Sichuan, Yunnan, Guizhou, Guangxi and Guangdong. Most of them speak Cantonese and Teochew and a few speak Southwestern Mandarin.

In addition, Vietnamese and Thai are also widely understood, especially near the country’s borders. Among of all foreign languages spoken in Laos now, French and English are the most commonly used, especially in the major tourist centers of Laos.

Laos is the second largest French-speaking nation in South East Asia with Cambodia and Vietnam and also a member of La Francophonie. The spread of French was started after the arrival of French explorers in Laos in the 19th century who created a colonial protection regime in this country. Unlike in Vietnam, the French did not use their power in Laos but introduced their language to schools in 1900s with limitation in Vientiane only.

When their regime stood strongly, French became the main dialect in academic and government institutions as well as beginning its spread to the Southern Laos after the formation of Pakse. In 1949 after Laos gained autonomy, both French and Lao were used as the official languages. Until 1953, Lao became the only official national language when the country independence was successful.

The French is used as a dialect for business and diploma and a third of students (about 35%) in Laos learn this language. In fact, the spoken French in Laos is based on standard Parisian French but there are some minor differences in vocabulary in comparison to other French dialects of Asia. In addition, the incorporation into French for some Lao words giving it a local flavor unique to Laos. This language is preferred by elite classes, those in higher professions, diplomats, and elders who were educated before 1975.

However, French is always threatened by English which is considered as a language of global trade nowadays. 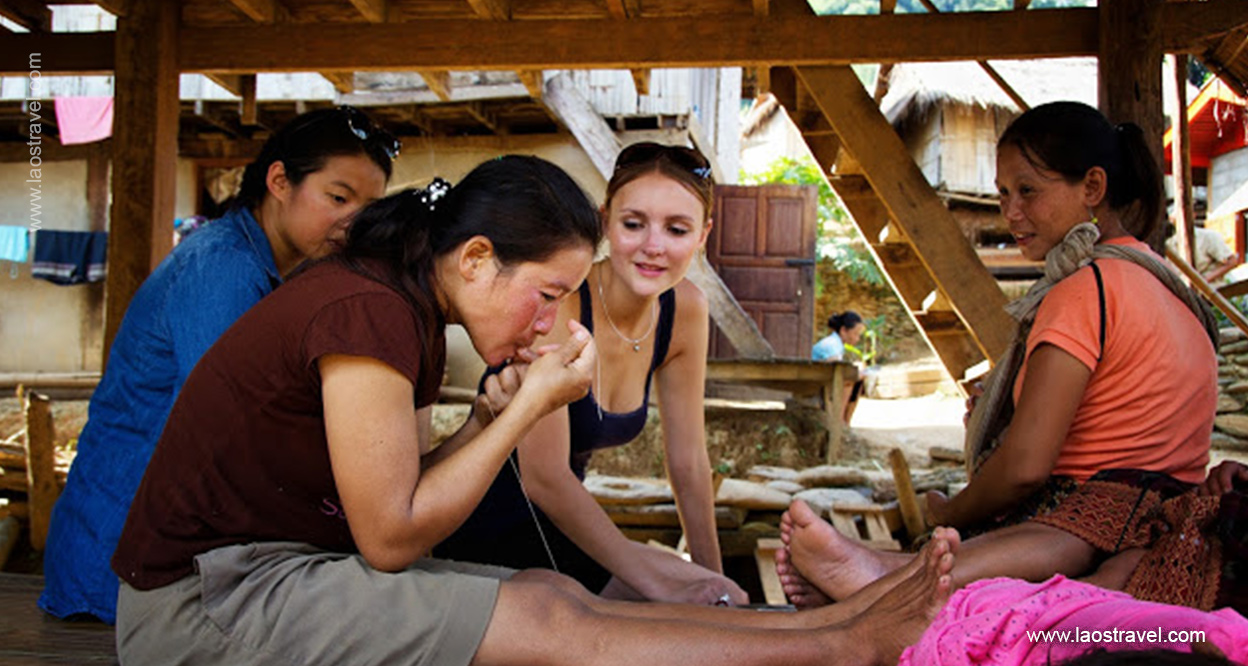 Foreign languages help to bring the closure between tourists and the locals.

Together with French, English also stands on its dominance as the most widely spoken European language, even has better won out in the tourism industry in recent years. It can be seen in the number of academic institutions or the system of many schools in Laos using English as a compulsory course/subject.

This language is understood by many people in Vientiane and other major tourist areas, from older people who learned English during Vietnam War or young people who are interest in using English now. However, both French and English are less used in the countryside of Laos.

Is Lao a hard language to learn?

Compared to other languages, Lao or Laotian does not take really long to learn. If you learn Lao first as the foundation, you can understand a variety of Lao regional dialects and Thai quicker as both languages are from the Tai-Kadai language class. However, if in case that you are from Thailand, better try and learn Lao phrases rather than re-using your Thai to show the effort and respect. Here are some basic Lao phrases that should be helpful in the communication during your Laos trip, especially in the countryside where not many people speak foreign languages.

– In Lao, there are no space between words, otherwise it indicates the end of a phrase;
– The number of consonants in Lao have been trying to get reduced recently because many of them indicate the same sound.

As a part of the culture of Laos, the more you understand about Laotian languages, the more variety of Laos attracts you to directly come and experience. Possessing many incredible sights from the beauty of nature to rich culture and history, Laos is worth as one of the highlight destinations of any visit. Plan your trip to Laos with team of Laos Travel to explore the slow, rather old-fashioned charm and friendly people of Laos – a hidden gem of South East Asia. 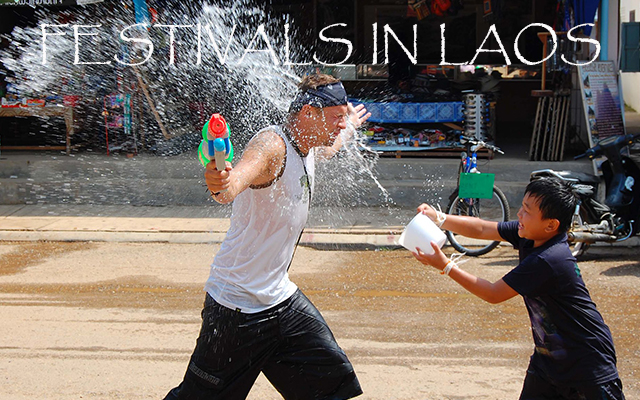 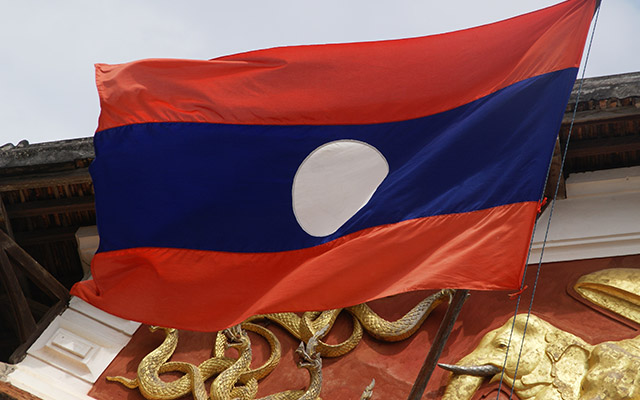 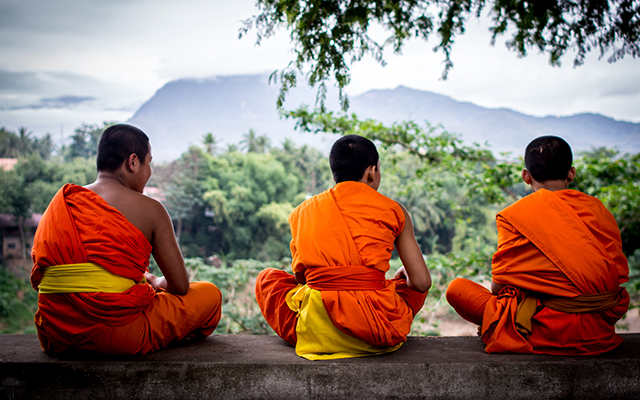